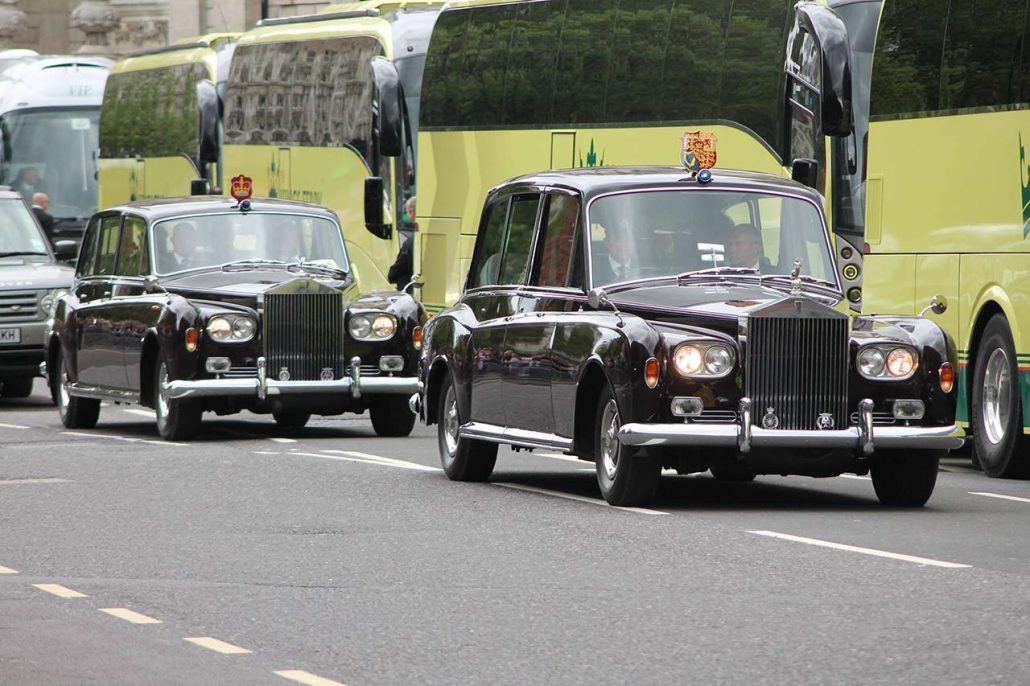 Whether or not you’re a fan of the Royal Family, there’s one thing all self-respecting car lovers can agree on, they’ve owned some pretty cool cars over the years. This post singles out one in particular, the custom-made Rolls-Royce Phantom VI in the pictures.

The vehicle was presented to Queen Elizabeth II in 1978 by the Society of Motor Manufacturers and Traders to commemorate her Silver Jubilee. It’s still in use today and is often seen on TV. It was used by Charles very recently when he stood in for the Queen at the State Opening of Parliament and it also took centre stage when it carried Kate Middleton to Westminster Abbey on her way to marry Prince William in 2011 (pictured below).

It also carried Princess Eugenie on her wedding day as well as being used by Charles when he arrived at Buckingham Palace in it for the first time in his new role as king.

More about the Silver Jubilee Car

Perhaps most importantly, it was the late Queen’s flagship car for over two decades, serving as her No.1 State Car from 1978 until 2002. She also had another Phantom VI; a standard 1986 model (the one on the left in the lead image). Both served as the official state cars until the introduction of two Bentley State Limousines in 2002.

When in use on official state business, the normal bonnet ornament, (the Spirit of Ecstasy) was replaced by a more ornate model of a dragon being slain by St George. As is the case with state cars, no number plates are displayed and if you look closely at the lead image, you’ll see a blue police light in the centre, just above the windscreen. It’s also very long… with a wheelbase of over 3.6 metres. This makes it both roomy and comfortable, with gorgeous upholstery and of course, a minibar!

This one-of-a-kind super-stylish limo has a raised roof for greater visibility both in and out and as you’d expect, it has armoured bodywork and glass for added protection. It also has an airtight cabin in case of a gas attack, with the tyres being reinforced with Kevlar to protect against punctures – both accidental or intentional.

The Rolls-Royce Phantom VI in general

the Phantom VI was made between 1968 and 1990. Only 374 were ever made, with less than 40 being manufactured in the last ten years of production. It was also the last Rolls-Royce that was made with a separate chassis, lending itself to easier customisation. It had coil springs at the front and leaf springs at the back with drum brakes all round.

The earlier Phantom VI was equipped with a 6.2 litre, 90-degree V8 engine with twin carbs and a 4-speed automatic. gearbox. In 1979 several upgrades led to a slightly bigger 6.7 litre engine and a 3-speed automatic gearbox with torque converter. It also adopted front and rear aircon. The bespoke coachwork build on a Phantom VI was undertaken by Mulliner Park Ward (formerly Park Ward & Co.) and it typically took about a year and a half to complete each car because of the meticulous attention to detail required in the build.

It’s not just British Royals who are fans of the Phantom VI; here’s a 1970 Rolls-Royce Phantom VI which is the official car used on ceremonial occasions to transport the Governor-General of Australia and visiting heads of state.

Rolls-Royce are quoted as saying about the Phantom VI:

“This Rolls-Royce is not simply an automobile, it is an institution on wheels. It is Great Britain.”

and I guess it’s easy to see why.