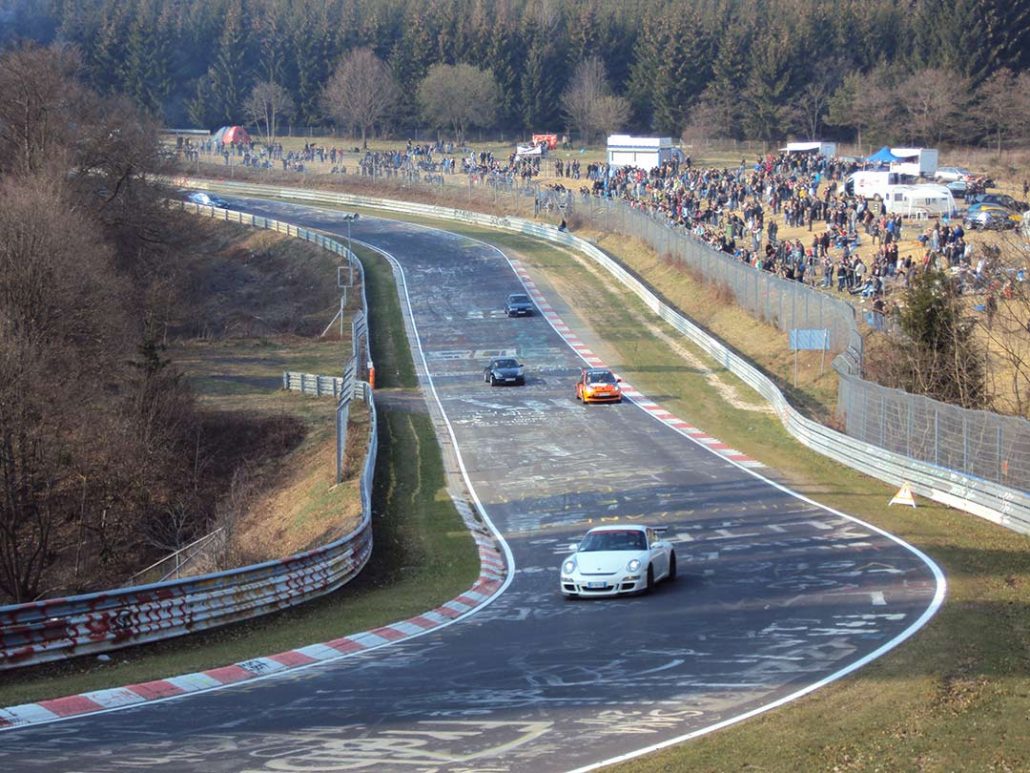 Why is The Nürburgring Famous?

Undoubtedly, most of our clients will have heard of the world-famous Nürburgring. Conversely, if you’re not a petrolhead and only see your car as a means to get from A to B, then you probably won’t have heard of the 16-mile race track nestled in the German countryside. In fact, we’ll have a little guess that a few of the cars that have come into the FRSH studio over the years have graced the track’s presence at some point in their lives. But, since it’s just a bit of tarmac, why is the Nürburgring so famous?

The original 28.265km track wound its way through trees and fields just outside the small town of Nürburg which is just south of Cologne, not far from the Belgian border; It’s now dripping in racing history, with the current track measuring 20.832km.

Construction began in 1925 and the original Nürburgring track was completed in 1927, hosting its first motorcycle and sidecar races in the summer of the same year. The victor, Toni Ulmen staked his claim in history on an English 350 cc Velocette. The cars followed the next day, with Rudolf Caracciola storming to victory in his Mercedes-Benz Compressor.

Even back then, members of the public could use the track in the evenings and on weekends, although they did have to pay a toll to drive on it. It originally consisted of 174 bends, was about 8 metres wide and the lap record was set in a Bugatti with an average speed of 69.97mph. Despite hosting numerous F1 Grand Prix events over the years on a shorter track, the full track was used for the last time in 1929 for competitive races.

During a practice session of the 1961 German Grand Prix, Phil Hill became the first person to dip below the 9-minute mark when he set a lap time of 8 minutes 55.2 seconds in his Ferrari 156, averaging 153.4 km/h ( 95.3 mph). Even today, most amateur drivers would struggle to match his impressive time even if they were behind the wheel of a high-performance road car.

It goes without saying that any race track can be dangerous and the Nürburgring was definitely no exception. Of course, as F1 cars get faster, the level of danger naturally increases. That’s why in 1967, a chicane was added just before the start/finish straight which actually made the track 25m longer. This token gesture of an additional chicane didn’t stop Jackie Stewart from nicknaming the circuit “The Green Hell” after he won the 1968 German Grand Prix in treacherous wet and foggy conditions.

Due to safety concerns, F1 drivers had already boycotted the Spa circuit in 1969. The following year, they did the same for the Nürburgring after the fatal crash of Piers Courage. Understandably, they wanted to race on safer tracks and were demanding that the Nürburgring be improved. This would take time, so the German Grand Prix was moved to Hockenheim which had already been modified.

As you’d expect, the track constantly evolved over the decades. Arnco barriers, fewer bumps and improved medical facilities were just a few of the improvements seen at the Nürburgring. Nevertheless, the cars were still getting faster and the race was notoriously difficult to cover by both official safety marshalls at the track and TV channels who were trying to show the whole race to a growing audience. The sheer size of the circuit also led to other problems such as the time it took to get medical equipment to the scene of a crash. Not only that, more unusual weather problems could play a role too. For instance, during a rainy weekend, half the circuit could be wet while the other half was dry, thus prompting inevitable safety concerns.

This was highlighted in 1976 when it was Niki Lauda himself who tried to persuade the other drivers to boycott the Grand Prix at the Nürburgring. Despite concerns about racing in dubious weather conditions, the other drivers voted against the idea and the race went ahead. Early in the race, the suspension on Lauda’s Ferrari failed and the car, still heavy with fuel, burst into flames. Fortunately for Lauda, a few other drivers were quickly on the scene and their heroic actions undoubtedly saved his life. Despite being badly burned in the crash, Lauda made an incredible recovery – Suffice it to say, the old, very long circuit never hosted another Grand Prix again.

A much shorter track for modern racing

Fast forward to 1984 and we see the emergence of a new, F1-friendly track. At only a few kilometres long (5.148 km), the track received mixed reviews and wasn’t liked by everyone. This was mainly due to fans not being able to get close to the track and it having far fewer overtaking opportunities.

F1 at the shorter, modern Nürburgring

Despite alternating between Hockenheim, the modern Nürburgring has hosted an F1 Grand Prix race in:

F1 winners at the modern track

You can find a full list of all winners at both the new and older track here but if you want to know what famous names have won at the modern F1 track since ’84, they are Lewis Hamilton, Sebastian Vettel, Mark Webber, Fernando Alonso, Michael Schumacher, Ralf Schumacher, Rubens Barrichello, Johnny Herbert, Mika Häkkinen, Jacques Villeneuve, Michele Alboreto and Alain Prost.

The Nürburgring of today

Today’s modern Nurburgring is essentially two tracks. First, there’s the old “Nordschleife” (aka Northern Loop) and the much shorter Grand Prix track (aka GP-Strecke). For the 24-hour endurance race, the tracks are combined.

Fatalities over the years

Inevitably, the Nürburgring has seen its fair share of fatalities over the years. Perhaps because of this, no official numbers are released. Whatever the actual number is, it doesn’t just include competitive racers, it’s also amateur drivers that have lost their lives at the circuit too. The only thing we do know is that Jeremey Clarkson once claimed in 2004 that the total was in excess of 200. And, according to Police reports, it’s estimated that the number increases from between 3 and 12 people each year.

Is the Nürburgring open to the public?

Yes, ever since it opened in 1927, the track has been used by the general public and it’s called the “Touristenfahrten”. In other words, anyone with a road-legal car or motorcycle, tour bus, motor home or car (even with a trailer) can drive on the “Nordschleife”. It’s open every day of the week, except when races take place of course. However, it does sometimes close in the winter if the weather is bad.

Although some sections have speed limits, the rest doesn’t and this is obviously part of its appeal. There are certain rules that you have to obey including only passing on the left and agreeing to not race other cars for example.

If you crash into the barriers or break down you’ll need to be towed off the circuit. If this happens to you, then you’ve officially joined the “Bongard Club”. Basically, the name comes from the company that operates the flatbeds that remove stricken cars.

Fancy going on a road trip?

If reading the above has whetted your appetite and you fancy immersing yourself in the rich history of the Nurburgring, you can find out how it all works by visiting the official website. If you’re wondering how much it costs, at the time of writing (July 2022), a weekday lap will cost you 25 Euros or 30 Euros at the weekend.

Although we’ve only scratched the surface of the Nürburgring’s incredible history in this post, hopefully, you can now see exactly why this historic venue is so famous all across the globe. With its enormous variety of curves, bends, hills and straights… coupled with its incredible history (featuring in many TV and film appearances too)… and the fact that practically anyone can drive on it in practically any vehicle, what’s not to love?

We wrap & detail stuff… and we love cars!

Nice article, I appreciate all of this Information about the ‘Ring.

I took the ferry over to the continent to drive on the Nurburgring ring. What a memorable experience it was. An experience I’ll never forget driving around a track with this history. glad you listed its F1 past. Thanks for the summary.